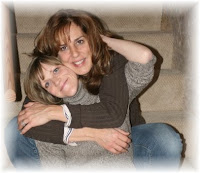 It's been five months today since Cim died. There isn't a day that goes by that I don't think of her. I've never had a biological sister but Cim was the closest thing I could get.

My memory today brings me back the beginning of our friendship.....

We went way back.

She lived in the big, brick, bungalow next door to me on Avenue "H" when I was about 4 or 5.

Cim had a head of hair full of tight, curly, brown ringlets and a dimple deeper than the grand canyon. My Uncle Floyd adored her and called her "Tiny Bubbles". He used to take us to Cal Park and then to Paul's Candy store. He gave us each a dollar and we each walked away with a brown paper bag filled with 100 pieces of glorious, penny candies.
We played dolls out in front of our houses. We dug in the dirt with silver spoons and we giggled and played innocently as children do.

Then she moved away.

About 10 years later I was with my mom buying new shoes and l0' and behold Cim and her mom were in the same shoe store. At the checkout counter, our mothers reminisced and caught up with one another. Cim and I were both about 13. Arms crossed and bored as hell, we just eyed one another up and down. I thought she looked like a Farrah Fawcet wanna-be and later I learned she thought I needed some major "work"... I was a horrible tomboy.

A few weeks later I was riding my bike around the neighborhood and I noticed a fight going on in the Taylor School playground. Curiosity got the best of me so I pulled up, hopped off of my new ten speed and made my way through the mob. There was Cim in the middle facing off with some stuck-up, popular bitch I never liked. I remember her yelling to me "Why don't you dress like a girl!?", when I'd ride my bike past her and her little "click".

This girl was saying some horrible, hurtful things to Cim and it seemed as if everyone was on her side. I don't know why but I spoke up and stuck up for Cim.

"Don't let her talk to you like that Cimmy, kick her ass!!"

Cim looked up, and saw me and when she did, that bitch kicked Cimmy right in the crotch.

Down Cim went and IN I went. I grabbed that chick and pulled her down on the ground. I punched her in the face and demanded she appologize to Cim. I pulled her up by her shirt so she was nose to nose with me and then I spit on. I remember telling her that she was just jealous that Cim was prettier (and Cim was gorgeous) than her and I her pushed her back down so hard that her head hit the cement. Everyone knew she didn't stand a chance. I could fight - I grew up on a block of all boys and I was pretty much fearless. The mob pulled me off of the bitch and scurried away, arms around her crying, sorry, little ass.

I leaned over to Cim and said "Hi, do you remember me? I'm Chris and we lived next door to one another when we were little . I saw you in the shoe store awhile ago" Cim responded, "Yea, I remember. We used to be good friends and you beat all the boys up for me."

And so our story goes. We remained best friends from that day forward.

I have so many wonderful stories about our friendship that I want to share. But I think it's best just to start at the beginning.
I wish our story didn't end.

I can't wait to hear chapter 2. I'm telling you we could write a really good book together... keep that in mind. In a time of recession who doesn't like an uplifting story.. Love you.