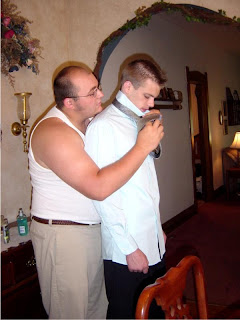 I hope my children know how cherished they are.

Although I didn't actually give birth to him, Ian is my oldest. He is my "Grumpy little Dwarf". Ian was and still is THE BEST big brother a mother could wish for (that's him on the left tying his little brothers tie!). Ian is the one I think I had to fight hardest for--I rarely won when I fought for him, but I did fight. It's hard to get a smile or a kind word out of him. But,I think that, out of all three of my kids he's actually the most sensitive and kind and generous. Ian is a family man, he's his father's son, and stands strong to his beliefs and values. He doesn't mince words and sometimes that can hurt the person on the recieving end of his line. To know him, is to love him and Ian does love fiercly in his own, grumpy kind of way. He's a lucky fellow--because he has TWO mom's that love him fiercly---I'm the second one! 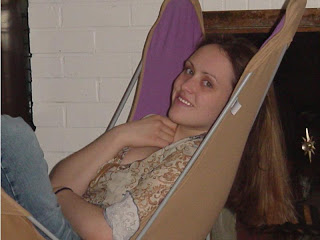 Poor Suz. She struggles with all sorts of sinus pain and work issues and headaches. I feel bad for her. I wish I could make all of her troubles go away-- but I can't. So I listen, empathize and wish the troubles could be mine and not hers. Now don't get me wrong! Suzy still goes out with her friends and gets "happy"too. She calls me almost every day and if she doesn't call me then I worry like any mama would. Suzy has a enormous heart, enormous energy and an enormous zest for life! Suzy - like Ian- has strong family values. Her family is her heart.


Last, but not least, is Eddie. My youngest son. The protected "little brother" of Ian and Suzy. 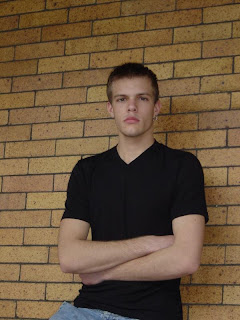 Hmmm....how can I explain Eddie? Well, as of lately, he's been my "Happy little Dwarf". Even though he graduated over a year ago and can't find a "real" job....
Eddie has been busy cooking at home, sleeping-in late and making lots-o-cash bartendering. Eddie took me out to dinner tonite. We shared a spicy Mexican meal which resulted in a race to the bathroom upon our return home. Eddie seems to be the most content in his life. I don't know if that's a GOOD thing but, as a mother, things could be worse. I am just happy that he's not all "down and out in Beverly Hills (or Whiting, Indiana)". I'd rather him be content and happy because life is a treasure and one may as well be fucking HAPPY living it!
Eddie also has strong family values. He cherishes Mr. Grumpy, Ms. Sneezy, his Father and Me.
And so this story ends. Cherish those that you love...Grumpy, Sneezy, Bashful, Doc, Sleepy, Dopey or Happy and, if she may come along.....Snow White (that would be ME!)