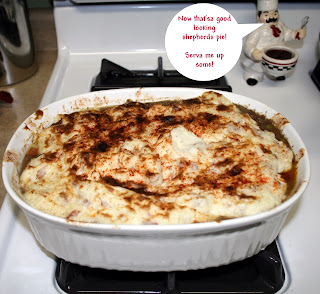 I did a little research and recipe hunting and found that Shepard's Pie can be made a gazillion different ways. There is no *authentic recipe*.

I browned up some ground lamb and beef, added a little rosemary, salt and pepper and simmered. Then I diced up some carrots and onion and added them to the pot. Then I added some frozen peas.

The aroma was delightful.

I made a rue and added to the simmering stew, which resulted in a thick, yummy gravy.

I transferred the stew to a casserole dish, topped it off with a layer of mashed potatoes and baked till the taters were browned.

Oh lordy, gordy, was it ever delicious.

Michael said, "Baby you out-did yourself with that one!".

you forgot that you added some parsnip too - that made it special.

my mouth is watering just remembering it, i hope your ambition doesn't wane tonight!

How come I miss out on all this creativity?